After completing the 2nd marathon, I wandered in the desert of my failure to reach my goal.  I wondered if I wasn’t cut out to run full marathons. Maybe I was too old to get it done under five hours. Perhaps I didn’t have the grit to push beyond my current level of endurance to cut the time needed. During this period, I allowed my negative inner dialogue to erode my confidence and undermine my commitment to my goal.

So, 2017 was a pretty aimless running year. I ran a Half in May and several other races but didn’t really train for anything specific. In 2018, I set a goal to stay 10K ready all year, and to test this by running the 10K distance, my least favorite, at least quarterly, which I did. I also ran two Half’s and an 86-mile relay with a team of women.  And thankfully, running became fun again.

As I came into 2019, I decided to attempt another sub-5 full marathon and to run a spring race this time, in the hopes of avoiding the hot weather I’d had with my prior races. The 2019 Nebraska winter tried to derail my training, with record snowfalls, ice and cold, but I dug deep and ran in arctic conditions, on snow packed and icy roads – only running twice on the treadmill.  I took the terrible conditions and used them to make me physically and mentally tougher.

On March 27, I ran my 20-mile training run and felt ready. That afternoon, the marathon I planned to run was cancelled due to epic flooding in Nebraska. I was set back once again. I shared my dilemma and my need to find an April 27 race with my various running groups and received a tremendous outpouring of ideas – one of which pointed me to the Run For The Lakes Marathon in Nisswa, MN, which was the race I ended up running.

I’ll admit that I wasn’t crazy about traveling for the race and I was afraid it would mean that I’d run a lonely race, without my local family there to support me. Traveling would also add some wear and tear on my body, traveling on Friday night, racing on Saturday morning and driving back on Saturday evening so I could fly to Vegas on Sunday for work. But I had trained and Nisswa offered the best chance for the cooler weather I needed.

When it came time to race, I asked others for help. I made an unreasonable request and asked my middle daughter, Grace, to travel with my husband Brian and me to be part of the support crew, even though the race was happening during her last weekend before finals. I asked for prayers from others. And I asked for help from the 4:30 pacer in Nisswa – placing my trust in her -- even though both of my pacers in the prior marathons had quit. 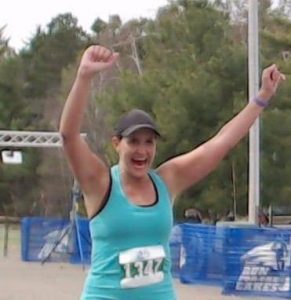 than my prior personal best. I finally got it done under five!  I ran with the 4:30 pace group for just short of 20 miles before beginning to drop back. At that point, my most powerful supporter, husband Brian, joined me on his bike and encouraged me to the finish.

So, what did I learn from my failures and then this success? A lot! Here are just a few of the lessons I gained:

I love this quote from athlete and runner Joe Henderson: 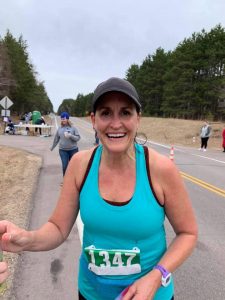 "Your toughness is made up of equal parts persistence and experience. You don't so much outrun your opponents as outlast and outsmart them, and the toughest opponent of all is the one inside your head."

I faced two mental opponents leading up to this success. The first was the temptation to quit – to not even try to run a full marathon again. The second was the risk of not being tough enough to prepare properly, build my strength and endurance, and then maintain the toughness on the course.  This time, with God’s help and the help of my family and friends, I bested them both.

Where have you overcome failure to generate success?  What strategies have you used to rise above your inner negativity and make it happen?  Please share them with us!