I can’t believe another Independence Day is upon us. Wow!  Time again to reflect on our blessings as Americans.

Earlier this year, I wrote about the three words I chose to guide 2018:  Change, Freedom and Joy.  Today, it seems appropriate to let Freedom ring in this 242nd birthday greeting to Lady Liberty.

I’ve been reflecting recently on how incredible it is that I have had the freedom to pursue a passion for leadership and strategy with a group of like-minded friends for nearly two decades.

I wouldn’t have this freedom if it weren’t for the sacrifice and commitment of our country’s powerful foremothers like Clara Barton, Susan B. Anthony, Eleanor Roosevelt, Rosa Parks, Gloria Steinem, Sandra Day O’Connor, Sally Ride and so many others.  Too often when we celebrate this holiday and our country’s rich history, we think of the famous men who framed our Constitution or gave their lives in the fight for freedom.  Right alongside those men were uncelebrated women fighting for freedom.  Today, I am profoundly grateful for their courage and commitment to freedom and equality for all.

One of those women, my mother, Della Lee, was the first in her family to graduate high school and then college.  Joining the Air Force as a registered nurse, she blazed a trail that was unusual for her time.  Getting married and having six kids, she settled into a more traditional wife role until my father went to Vietnam.  When he returned, she’d traded her station wagon for a VW bus, earned her Masters in Counseling and developed a new found commitment to independence.  She was a bra-burning advocate for ERA, gay rights and equal pay for women long before it was socially accepted.  Della taught me to speak up for myself and others, to practice unconditional positive regard for ALL and to fearlessly pursue whatever passion or interest I had.  Because of her example, her efforts and her influence, I have the freedom to have it all:  a relationship with God, a great love with Brian, a precious family, a big vocation, and many hobbies and pursuits.  She is my own personal Lady Liberty and I am so lucky to still have her with me to guide me today. 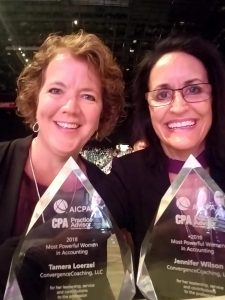 cause of Della, I had the courage to work for myself.  And this led me to many other courageous women, starting with my sister Ruth and partner Tamera, who both took a leap of faith to pursue a cool idea that offered lots of flexibility and freedom, but paid almost nothing over 17 years ago.  Since then, many other bright women and men have joined us, mentored us, supported us, and promoted us.   Most recently, two powerful, talented women, Gail Perry and Kimberly Ellison Taylor presented Tamera and I with the AICPA/CPA Practice Advisor 2018 Most Powerful Women in Accounting award.  Standing next to my dear partner-in-transformation Tamera and so many other powerful female leaders in this award ceremony was one of the most affirming things I’ve done so far.

My hope is that my work and life will provide a pathway for even greater freedom and power for my daughters, your daughters and other women in our profession and country.  I have had so many blessings as an American woman and today, I celebrate all Lady Liberties past, present and future.