What About the Railroad?

Home>Posts>Leadership>What About the Railroad?
Previous Next

What About the Railroad?

I hail from Omaha.  Because of my geography, a partner client expected me to know something about the making of the transcontinental railroad.  My pitiful knowledge of this undertaking that began, on one end, in my hometown, sent this partner out to repair my ignorance.  To do so, he sent me a copy of Stephen E. Ambrose’s Nothing Like it In the World (http://www.amazon.com/Nothing-Like-World-Transcontinental-1863-1869/dp/0684846098).

I must admit that I put off reading this ~400 page, eight-point type history book for a month or two.  But a combination of guilt and curiosity caused me to take it – and read it – on vacation last month.  While it took grit to get through, it was a wonderful story that filled so many gaps in my understanding of the local Omaha founders and the beginnings of the Union Pacific Railroad.  More than that, the book reminded me of what it takes for a group of people to accomplish something uncommon and life-changing.  I thought I’d share what I learned about achieving spectacular success from the story of our nation’s quest to unify the east and west via the transcontinental railroad.

The top ingredients to the success of the railroad – and to your success in achieving your initiatives - are:

•        Vision.  Initially, conventional wisdom said that a single railroad across our untamed nation wasn’t possible.  But two people in particular could envision it and believed in it: Ted Judah and Grenville Dodge.  These men believed in something before it was popular, and they spoke of their vision and pursued it with anyone willing to engage (like my partner, Tamera, shared in her “Speak It Into Existence” post).  To achieve success, we have to take the time to dream and then generate a vision that we can share with others.

•        Enrollment.  Judah and Dodge shared their vision for the railroad with everyone they met.  Between them, they lobbied Abraham Lincoln, William T. Sherman, Ulysses S. Grant and countless politicians to pave the way for government support of the railroad.  Individually, they identified key stakeholders to invest and lead the initiatives and helped form the two railroad entities – the Union Railroad and Pacific Railroad.  These two men had a vision, but they knew they could not do it alone, and that it would not end up being done their way.  To achieve success, we have to enroll others and be willing to give up “our baby” – our idea – to allow others to take it, shape it and help make it happen.

•        Risk taking.  Many investors took great risks against great odds to build the railroad.  None took more risks than the initial founders of the Pacific and Union Railroads – and they went through very tough and lean times for long periods before they could be sure that their investment was sound.  Great achievements and rewards require that we take risks, put ourselves out there and say and do the things that others won’t.  If it is easy, rest assured that others will beat you to it.

•        Competition.  The Pacific and Union Railroad companies competed to lay, and own, the most track.  Our government set up the building of the railroad to be a competition, and it established a sense of urgency and pride in the people of both teams.  There is always something we can measure ourselves against – our external competitors, last year’s actual results, this year’s budget, achieving a specific time – and the thrill of competing can give focus and direction to your efforts.

•        Project management.  Nothing of this scale had ever been undertaken before.  The route to complete the railroad was far from certain.  The resources needed – people, horses, wagons, iron, lumber, money and time -- were unquantifiable.  That didn’t stop the leaders of the Pacific and Union Railroads from making their best guesses and estimates and amassing and organizing the resources needed to do the job.   Success requires the willingness to estimate resources needed, timing and costs so that your project feels real to others and can proceed – even in the face of enormous uncertainties.

•        Teamwork and organization.  It is estimated that it took 10-12,000 laborers to build the railroad.  The people who built it were from all continents and included former Civil War soldiers, the Irish, former slaves and thousands of Chinese immigrants.  New paradigms in organizational management and leadership were invented to support these new super teams, which were dispersed across the country and required that new organization-wide management, remote communication and incentive programs be employed.  The laborers who built the railroad endured unbelievable conditions – weather, altitude, explosives, and hostile attacks – but they were driven by vision, competition and financial gain toward their goal.  To achieve success, we have to innovate new management and organizational structures to foster a sense of teamwork and a clear payoff when goals are met.

•        Leadership.  We cannot underestimate the impact of leadership on any project, but especially a project of this scale.  At ConvergenceCoaching, we know that leadership is more about who you are being than what you are doing.  In Ambrose’s tale of the railroad, the various leaders were far from perfect, but they each contributed their unique leadership ingredient – incredible passion, impeachable integrity, uncommon ingenuity, relentless drive, human empathy and more.  What special leadership ingredient do you bring to your initiatives?  Who are you being that could enable a success of this magnitude in your firm, department or engagement or in your state, neighborhood or home?

I am not a history buff or a railroad groupie, either.  But I greatly admire the vision, enrollment, risk taking, competition, project management, teamwork, organization and leadership that the building of the transcontinental railroad represents.  Which of these success ingredients is your biggest challenge?  How come?  Post a comment to share your challenges and stories with us – we’re interested! 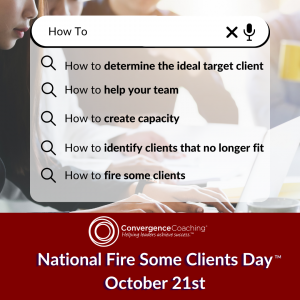 At ConvergenceCoaching, we believe firms must stop talking about the capacity problem and start solving it. The fastest way to create space for your team members is to right-size your capacity and make the difficult decision to let go of certain clients. And, because every firm we know is in dire need of right sizing, we are declaring October 21st National Fire Some Clients Day™!